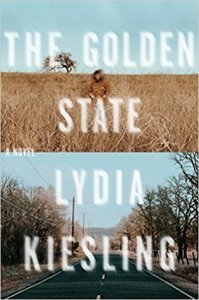 There’s so much I loved about Lydia Kiesling’s The Golden State. What stands out to me most is its portrayal of motherhood, but I also loved the picture of the northern Californian landscape and culture we get in the book, the portrayal of university life in the book’s beginning, and the poignancy and political commentary in the situation with the protagonist and her husband. I also really liked the novel’s voice — it was sharp, funny, smart, and communicated a world of feeling in an understated way.

The protagonist, Daphne, works at an unnamed San Francisco university (Berkeley) and cares for her toddler-aged daughter. Her husband is stuck in Turkey, unable to return to the U.S. because he got screwed over by a nasty border officer, so Daphne has to care for her daughter alone. This part sent waves of anxiety through me, both at the knowledge that our government routinely separates families in this way, and at the thought of having to care for a young child as a single parent. Kiesling describes perfectly what it’s like to get through a very long day with a child who demands your attention but is also kind of boring, as young children are. The predicament with her husband is unsettling; he is simply stuck in Turkey with his family until the very, very slow bureaucratic wheels turn and his request to return to the U.S. is considered. Daphne is considering joining her husband in Turkey, but isn’t sure what she wants to do.

Instead, what she does is leave work suddenly one day, pick up her daughter, and drive hours up north to a mobile home her grandparents have left her in a tiny town in the middle of nowhere. She thinks there’s a chance she’ll have some time and space up there to figure out how to deal with her situation. She does have some of that, but she also learns about the movement underway in that part of California to secede from the state and form the “State of Jefferson” (mainly in order to avoid taxes). She gets involved in the lives of her neighbors and an elderly woman she happens to meet in a restaurant.

I loved how the novel is politically timely, both in terms of domestic and international issues that connect in important ways, but also about experiences and situations that can happen at any time to any one — being separated from family, struggling with work, struggling with children that one deeply loves but that are hard to take care of day after day. The novel is in first person, and Daphne makes a wonderful companion, someone whose voice I was happy to have in my head for the few days it took me to read this.

One response to “Lydia Kiesling’s The Golden State”