A couple months ago, I was lucky enough to snag tickets to see Stephen King and his son Owen King at a reading in Manhattan. The tickets were on sale for about five minutes before selling out, and I barely got my hands on a pair. The event itself was this past Tuesday, and this makes the third time I’ve seen King at a reading or book signing, twice in Manhattan and once in Portsmouth, New Hampshire. And I’m not really a big Stephen King fan! I’ve read three of his novels and liked them, but I don’t read much horror, and so don’t pick him up regularly. But, of course, Hobgoblin is a huge fan, and I’m always happy to accompany him to events.

This one was fun. Stephen and Owen both read twice, the first time reading from each other’s books, and the second time reading from their own. Stephen’s new book is Doctor Sleep, a sequel to The Shining, and Owen’s is Double Feature, neither of which I have read or am likely to read, to be honest, but Hobgoblin assures me that Owen’s book is very good, and I’m sure Stephen’s will be too. The most enjoyable part of the evening, though, was an interlude between readings when the two of them chatted informally for a while. Owen pulled out a book he said he’d found in a used bookstore, which turned out to be The Stephen King Quiz Book. Owen then asked Stephen a few questions about himself. The first question was an easy one about where he was born, which Stephen answered with no trouble. But the next three questions he missed! I don’t remember the specifics, but they were questions about places and character names from his novels, and I guess when you’ve written as much as Stephen King has, the details begin to get blurry after a while. So we all had a good, friendly laugh about that.

It was moving to see father and son together; they were clearly proud of each other and enjoyed each other’s company. One of the audience members asked Stephen, had he known back in 1970 that he would one day become Stephen King the extremely famous and popular author, whether he would have done anything differently back then. From what I know about some difficult times in his life, there are lots of ways he could have answered this. But he said, you know, I’m still happily married to the woman I married back then, and I have three great kids, and no, I wouldn’t have done anything differently. It was thoroughly charming.

Part of the price of admission was a copy of Doctor Sleep to be distributed after the reading. Some of them would be signed, but not all, and it was a matter of chance which each person would get. And look what I came home with: 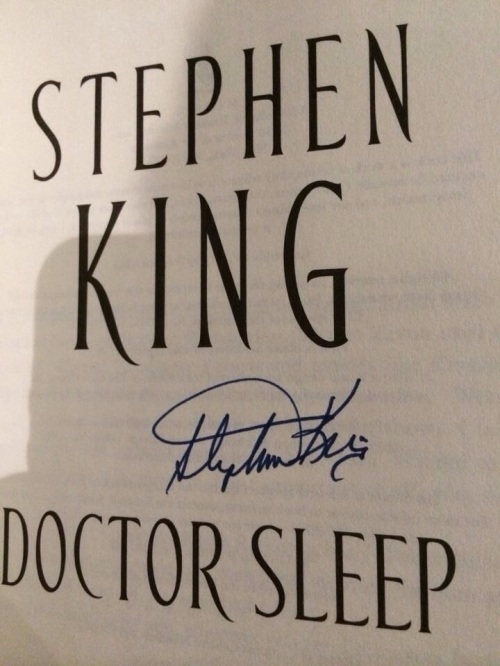