The bookish highlight of the last few weeks is undoubtedly getting to hear Zadie Smith and Michael Chabon read at the 92nd St. Y in Manhattan this past Thursday. The only disappointment is that Hobgoblin and I couldn’t stay late enough to say hi to the authors and get books signed, but the reading itself was great. Chabon went first and read Part 3 of Telegraph Avenue in its entirety, which consisted of one sentence and took about 40 minutes to read. I don’t know much about the novel and don’t know how the section fit into the book as a whole, but it was an entertaining piece, and Chabon is a very good reader. He was funny and managed to capture the one-sentence feel of the excerpt without sounding manic or breathless. Zadie Smith read two sections from NW, both of which were good set pieces. She also was a great reader; I especially admired the way she caught the different accents of her characters. She, too, was funny. They did a brief question and answer session afterward, but the questions were mostly stupid ones, the first one about which actors they would cast to play their characters and another one about the presidential debate the night before. They did a good job answering the questions in spite of the questions’ lameness, although it seemed pretty clear that Chabon felt way more comfortable up there than Smith did. I’ve heard her describe herself as shy, and that seemed to be true, although she was still charming.

So, I finished NW a couple weeks ago, I guess it is, and I liked it a lot. I’ve read a number of mixed reviews of the novel, and the reviewers’ criticisms might have had some validity to them, but they picked things out for criticism that I didn’t think mattered all that much. The book had an energy that I liked, it had characters I was drawn to, it did interesting things with language, and it explored its themes in a satisfactory way. It may have a structure that’s kind of a mess, but that didn’t detract from the good things. It’s told in four parts, the first three following a different character, and a short fourth section wrapping things up. The first and third sections follow two women who grew up as friends and stayed friends into adulthood, although their friendship goes through some difficult times and their feelings toward each other are complex. These sections were my favorites, both for the interesting writing in them, and for the themes they explore: class differences, career and marriage tensions, having or not having children, growing up and changing but staying roughly in the same neighborhood. The second section was also good, but more conventionally told. I think this is a novel that takes a while to absorb and I wouldn’t be surprised to see the critical consensus change over time.

I also read The Long Goodbye for my mystery book group, which I enjoyed, although I felt that it was a little too long and the quality of the writing began to slacken as I neared the end. But Raymond Chandler is still great – he has such a way with images. The book is ultimately about friendship, I think, which is an interesting topic for a mystery novel. Philip Marlowe, Chandler’s protagonist, is entertainingly stubborn, illogical, and a smart-ass. I also read Nicholson Baker’s novel  A Box of Matches, which I liked, although it’s in the same vein as The Mezzanine, but not as good and suffers from the comparison. The premise is that the protagonist has decided to get up at 4:00 each morning, light a fire, and write out his thoughts, and these writings are the novel itself. They are about mundane things, as Baker’s novels often are, but described with lavish and loving detail. The best chapters gesture toward deeper ideas and feelings, and I liked the way more profound thoughts are hinted at through the juxtaposition of stories – stories about death, say, or about animals and what we can know about their minds. Not all chapters are that successful, but when they work, they have lightness and depth both.

And just now I finished the new biography of David Foster Wallace, Every Love Story is a Ghost Story, by D.T. Max. I’m still gathering my thoughts about it, but I think it was a very good biography. It’s only 300 pages and therefore not bogged down with detail, but it captures his life well, and every time Max discussed one of Wallace’s books, I immediately wanted to read or reread it. I think Max’s book is very good; what I’m still gathering my thoughts about is what I think about Wallace himself. He is one of my favorite writers, and I’ll return to his books again and again, but he’s a complicated person, unlikeable in a number of ways, but at the same time a charismatic and compelling figure, and also a sad one, a person who battled crushing depression his whole life.

As for what I’m currently reading, that includes the Hermione Lee biography of Woolf (still! I may finish in the next week or two) and also her diaries, although I’ve slowed down with those in an attempt to finish other things. I began listening to The Newlyweds by Nell Freudenberger on audio the other day, and I also picked up More Baths, Less Talking by Nick Hornby. I need to find a new novel (one to read and not listen to), but I can’t decide which one to pick up next, so I’ve focused on finishing my nonfiction books instead. 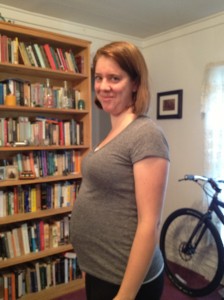 I’m still feeling remarkably well and can only hope I feel this way as long as possible. I’m even still riding, although only now and then, and only on my hybrid bike with an adjustable stem that raises up the handlebars (you can see it in the background) and wearing one of Hobgoblin’s much roomier jerseys. But it’s great to be able to ride, and when I’m not riding, I’m often out walking in the woods, which is lovely.

Have a great weekend everyone!