The short trip from Dingle, Ireland, to London was a little disorienting. On the way to Shannon airport, we chatted with our bus driver the entire 2.5 hours or so it took to get there; he, like everyone we met in Dingle, was incredibly welcoming and enthusiastic about American visitors, and we had a great time talking about our experiences in Ireland, and his experiences in New York City (he said the best thing ever is to be an actual Irish person in NYC on St. Patrick’s Day. You are an instant celebrity, and he had never felt so popular. No wonder he loves the U.S.).

London was absolutely wonderful, but it felt odd that no one wanted to talk to us anymore, and we would walk into pubs to find people ignoring us. All the sudden, we had to figure everything out on our own and didn’t have a guide to tell us the best places to go. And the temperatures there got above 60 degrees! We adjusted quickly, and spent the next five days seeing as many sites as we could fit in. I had never been to London before, and it had been many years since Hobgoblin visited, so we set out to see all the major tourist sites. First up on Monday was the tower, and here’s a picture of Tower bridge:

From there, we climbed the Great Fire Monument, and toured St. Paul’s Cathedral (climbing to the top there as well — I climbed SO many stairs that day!). Over the next few days, we walked by Parliament, Big Ben, and Buckingham Palace, walked through St. James Park, and toured Westminster Abbey (spending a lot of time in Poet’s Corner). Tuesday night we saw Much Ado About Nothing in the Globe Theater. It was a great production — very funny with lots of good energy from the actors and audience. I had to laugh at the people in front of us as we left the theater complaining about how long the play was and how Shakespeare can go on and on and could have benefited from speeding things up. A response to be proud of, right?

Let’s see — we also saw the National Gallery — or parts of it, rather, since neither of us has a whole lot of endurance for museums. We tend to take 1-1 1/2 hours, see the sections that most interest us and call it a day. I couldn’t help but feel that each museum we saw we could have spent several days in. We also saw the British Museum (parts), a highlight of which was the Elgin marbles, and the London Museum, a great place to learn about the history of the city. At the end of our trip, we spent some time in the Victoria and Albert museum, although by that time, I’d had enough of reading museum displays, and just walked around looking at all the pretty things (of which they have tons — I loved the jewelry section in particular).

What else? We walked around Bloomsbury:

and saw Samuel Johnson’s house, as well as taking a guided tour called “Dr. Johnson’s Fleet Street,” where we saw some of Johnson’s haunts.

Somewhere in there we visited the Charles Dickens house, the Sherlock Holmes museum (cheesy, but fun), and the Carlyle house, which was a favorite, not least for the … odd … but very enthusiastic guides who showed us around the place. Here’s a picture of the tiny garden in the back: 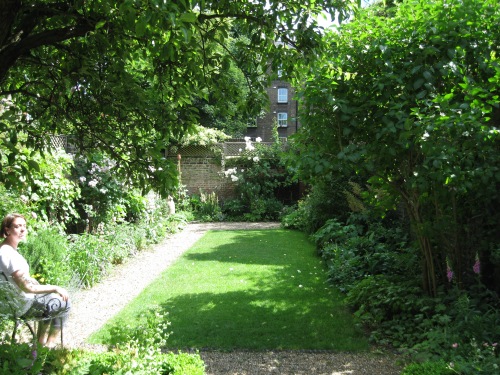 We also visited a ton of bookshops, including Slightly Foxed, which wasn’t too far from our hotel and which we stopped by three times, although once for only 10 minutes before closing time. Also, the Persephone bookshop, and the London Review bookshop. We walked past 84 Charing Cross Road, which I knew had turned into a Pizza Hut, but what I didn’t know was that there are a bunch of bookstores elsewhere on Charing Cross, so we went to Blackwell’s and Foyle’s, as well as several shops with antiquarian and used books. And, of course, we went to Waterstone’s; I’m not even sure how many of them. I came home with 11 books, but I’ll tell you about those later.

By Friday, our fifth full day there, we were getting quite tired, so we started to slow our pace a bit, and we spent time just sitting in Hyde Park. On Saturday, it was time to go to Oxford to see Becky. After a tour of the city and some of the colleges: 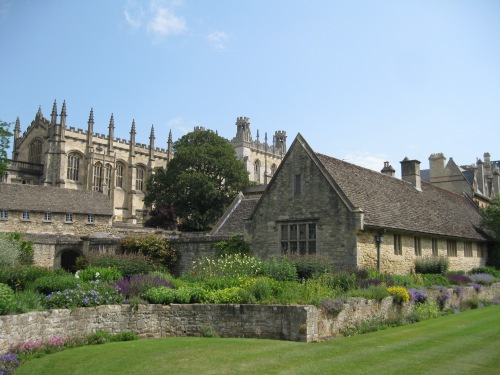 Becky understood exactly what we needed, which was a chance to sit. So, we got some lunch and sat, found a pretty place along one of the rivers and sat, sat for a couple hours over tea, sat in a pub, sat over dinner. It was perfect and a great way to catch up on all our news.

Sunday was our last full day in London, and we spent it quietly, visiting some of our favorite bookshops and eating, and Monday we came home.

I’m satisfied what we did while there: there is obviously tons more to see in London, but I saw enough that if I don’t make it back for a while, I won’t mind too much. In addition to all the museums, churches, etc., we walked through a lot of neighborhoods, and I was happy to get a sense, even if it’s limited, of various parts of the city and how they all fit together.

And now it’s time to get back to books — hopefully I’ll be back soon to write about what I’ve been reading.

12 responses to “On to London”