This year has been all over the place as far as riding is concerned. I rode steadily for the first few weeks of the year, and then really awful weather hit, and I stopped riding entirely for almost four weeks. Then I started, then I stopped, and now I’ve started again. And today was my first race! No, I was not really prepared for it. I’m in the worst shape for March that I’ve been in in a long time. But the race went okay anyway. It was 20 laps long, and the pack stayed together most of the way. I stayed with the rest of the riders until lap 18, and then I dropped back a bit climbing the short hill on the course, and I couldn’t catch back on. I finished, but I did the last two laps on my own.

I know I could have done better if I had ridden smarter. Bike racing is just as much about tactics and positioning as it is about fitness, and I’m not good at all at tactics and positioning. So when my fitness is just so-so, I’m kind of screwed. I spent most of the race at or near the back of the pack, which puts me in danger of getting dropped, especially on the hill, where lack of fitness really shows. If I had been closer to the front of the pack, slowing down on the hill wouldn’t have mattered as much because I would still have been with the rest of the riders and wouldn’t have had to catch up. It’s having to catch up that’s a problem.

The thing is, I dislike racing enough that I’m not motivated to work on tactics and positioning. I had three teammates to ride with today, and one other woman who is sort of an honorary teammate, plus a bunch of other women from other teams that I am acquaintances with, and all that is fun. The social aspect is the real reason to race, I think — that, along with gaining fitness. I don’t do it because I’m driven to win. So … I stay at the back of the pack. Whatever.

I am excited about getting strong again, though. The real, real reason to race is to get strong so that I can do fast group rides. For me, that’s where the fun lies: riding the cupcake loop, the Lake Waramaug loop, the ridiculous 150-mile Massachusetts loop, and doing these rides with friends. There’s little that’s more fun than riding fast with a bunch of friends, full of adrenaline, laughing and joking, enjoying the Connecticut countryside. I’m hoping for a lot of rides like that this year.

Here’s a picture of my teammates and I at the start line shortly before the race started. I’m second from the right. 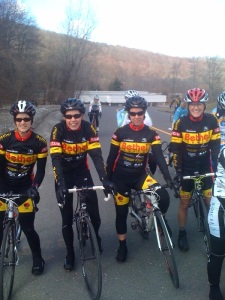