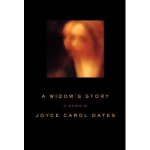 Joyce Carol Oates’s memoir A Widow’s Story is a harrowing, powerful read. I had trouble putting it down, even though it was thoroughly wrenching. I started reading it on my iPhone (my copy courtesy of the publisher) and only after I’d been reading awhile did I figure out that it’s over 400 pages long; it turned out to be a very quick 400 pages, but still, I wondered how she would keep it up for that long. How could she write with such detail, such honesty, such emotion, how could she keep up that level of intensity and make the book readable at that length?

The book tells the story of the death of Oates’s husband, Raymond Smith, in February, 2008. It was a fairly quick final illness and death; he was fine one day, and the next in the hospital suffering from pneumonia. He died a few days later from an infection. Oates tells the story of the days in the hospital and then the days, weeks, and months afterward as she tries to survive and make sense of what happened. She is thoroughly distraught, full of anger and guilt, and she collects sleeping pills in case she decides to commit suicide. The thought of suicide is a comfort, an escape available if she needs it. She has friends who take care of her and help her through all the tasks a widow faces (the funeral, the will, etc.), but she feels only a shell of the person she once was. Her world is an entirely new, unrecognizable, horrible place.

She writes about all this in great detail, describing her thoughts and emotions each step of the way. It should get dull, but it doesn’t: there’s something riveting about her voice that kept me almost spellbound. There is a lot of repetition, which also should get dull, but doesn’t; she faces the same problems again and again — not wanting to be out with people but when she’s home alone not wanting to be there either, getting angry when people say insensitive things, feeling guilty for surviving her husband, thinking about and counting her sleeping pills — and each time it’s a fresh emotional hit, and I felt like I was right there with her.

The writing is awkward, full of dashes, fragments, parenthetical phrases, and various kinds of stuttering and repetition, but the awkwardness works because it captures the emotional intensity of the experience:

This nightmare week of my life — and yet— during this week Ray is still alive.

She also frequently switches into a detached, third person point of view, printed in italics, to talk about “the widow”:

Something of the derangement of Widowhood is beginning here. For in dreams our future selves are being prepared. In denial that her husband is seriously ill the Widow-to-Be will not, when she returns home that evening, research E. coli on the Internet. Not for nearly eighteenth months after her husband’s death will she look up this common bacterial strain to discover the blunt statement she’d instinctively feared at the time and could not have risked discovering: pneumonia due to Escherichia coli has a reported mortality rate of up to 70 percent.

She also explains things that don’t really need to be explained, for example, describing Catholic theology and giving us a history of lobotomies, things that relate to the story she is telling, but don’t need to be dwelt on in the way she does. It feels, though, as if Oates no longer understands the world around her and needs to explain it to herself. She needs to tell herself the story of her life and her husband’s life and all the details that went into them, and she needs to recount to herself what she, “the widow,” is experiencing, in order to try to grasp it.

She touches only lightly on the question of why she is writing the memoir and doesn’t discuss at all what the experience of writing it is like. In fact, she mentions grief memoirs others have written and wonders why they wrote them, without taking up the question for herself, or at least not until near the book’s end, when she very briefly says:

Though I am writing this memoir to see what can be made of the phenomenon of “grief” in the most exactly minute of ways, I am no longer convinced that there is any inherent value in grief; or, if there is, if wisdom springs from the experience of terrible loss, it’s a wisdom one might do without.

That’s all we get about her purpose and motivations. I generally like to have more self-consciousness from memoir writers, more discussion of the purpose and meaning of the writing (although I may be in the minority on this — most memoir writers that I know of don’t do it), but in this case, the reticence works. Throughout the whole book Oates seems to be a mystery to herself; she no longer recognizes herself in her new role as widow, so how can she analyze her motivations? The most she can do is describe what is happening, moment by moment.