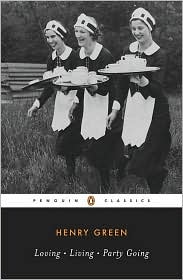 I have now finished Henry Green’s novel Loving, and while I was tempted to continue reading the two other novels in my edition, Living and Party Going, I decided to save those novels for another time. I would very much like to read more Henry Green at some point, though, because I thought Loving was very good.

It’s the kind of novel where not a whole lot happens. People talk, mainly. In fact, much of the novel is written in dialogue, and the narrator remains aloof, telling us what things look like and who does what, but not digging deeply into people’s thoughts. At times it’s a little like a play where you have stage directions in place of a narrator. It’s not a play, of course — there is a narrator who tells you the basics of what’s going on, but it’s a very distant narrator who refrains from commentary or judgment.

The novel is set during World War II (it’s published in 1945) and tells the story of a family and its servants who are living in a castle in Ireland. Most of these people are English. They are at a distance from the war raging on the continent, but are worried about a possible invasion and also about the Irish Republican Army and are uncertain whether they should  remain in the mild anxiety they are currently living in or venture back to England, where they have family, but where they might be forced to join the military.

We get scenes of the family itself, a mother and daughter-in-law with her children, but spend most of the time with the servants. The story is made up of a series of small events that the servants gossip about: one of the children kills one of the estate’s many peacocks, an expensive ring has gone missing, two of the servants are flirting with each other, and others have fallen in love. The novel follows them around as one woman tries to hide her drinking habit and two young girls giggle at absolutely everything and the nanny gets sick so the children aren’t properly watched after. And then one of the servants finds the daughter-in-law in bed with a man who’s not her husband, and everyone is thoroughly scandalized. The butler spends his time learning how to cook the books and extort bribes so he can set a little money aside for the future.

It’s a quiet picture of how life really is, especially during wartime when there’s a nagging anxiety underlying everything. Conversations circle around the same subjects again and again, and more often than not, people fail to understand each other, especially the servants and those they serve. These two groups try to understand each other, obsess about each other, get frustrated and angry, and then work hard at trying to hide it so that life can proceed as quietly as possible.

The writing is beautiful. The dialogue is done perfectly, capturing the distinct voices of the characters and also the rhythms of typical conversations, the way people repeat things and jump suddenly from one idea to the next. And although the narration is extremely distant, the narrator now and then comes out with beautiful descriptive sentences: “The slow tide frosted her dark eyes, endowed them with facets,” or “He slipped inside like an eel into its drainpipe,” or “When he saw her face which was as it sometimes looked on her bad days so called, pale or blotchy as a shrimp before boiling, he cleared his throat.” He gets the rhythm of sentences exactly right:

She got no other answer than a wail. Then Miss Burch rolled over face to the wall. The cap twisted off her head. Edith gently put it back and because her shiny skull was sideways on that pillow she could only place the cap so that it sat at right angles to Miss Burch’s pinched nose, as someone lying in the open puts their hat to protect their face and terrible eyes.

John Updike wrote the introduction to my edition, and I am perfectly willing to believe him when he claims that insofar as one can learn to write, Henry Green taught him. I’m certainly looking forward to reading more of his work.