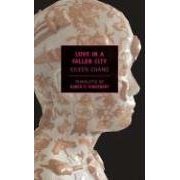 First, let me say that I am SO HAPPY to be sitting quietly in my study doing nothing right now. I rode the hardest race of the season this morning, and now I’m beat (riding seems to be good for my back and neck, at least in the short term — they are feeling much better). It was a hilly road race, and while I didn’t do all that well, getting dropped on a particularly nasty hill, I did better than last year, when I got dropped on one of the foothills of the particularly nasty hill, and that’s really all I was hoping for. If you’d like to hear more about these vicious hills, read Hobgoblin. All I have to say about it is that hills suck.

But I wanted to write about Eileen Chang’s Love in a Fallen City, a collection of novellas and stories. Most of them were first published in China in 1944 in a book called Romances, and they have been reissued by the wonderful NYRB Classics. I got off to a tiny bit of a slow start with the first novella, but after that I gobbled these stories up; they are gripping tales of love, family, and politics — often about the conflict among these three things. Chang lived through and wrote about political and social turmoil; the title novella takes place in a besieged Hong Kong, where scenes of violence strengthen the main character Liusu’s shaky romance and settle her uncertain future. This is not to belittle the political turmoil of the time, but to show how it can affect individual people:

Hong Kong’s defeat had brought Liusu victory. But in this unreasonable world, who can distinguish cause from effect? Who knows which is which? Did a great city fall so that she could be vindicated? Countless thousands of people dead, countless thousands of people suffering, after than an earth-shaking revolution … Liusu didn’t feel there was anything subtle about her place in history.

Liusu’s “victory” is getting her lover to marry her, therefore ensuring a comfortable future and no loss of social status. In these stories, love often seems indistinguishable from war — whether it takes place in a besieged city or not, love and courtship can be a fight for one’s life.

Chang also writes about the conflict between traditional family structures and customs and the modern world that’s threatening them. One of the things that’s fascinating about this book is the glimpse it gives into a world where family members refer to each other as “Ninth Old Master” or “Second Mistress” or “Third Brother,” where a matchmaker arranges marriages, and where one’s status in society can determine one’s life. But the stories also tell of characters who are struggling to be modern, such as Zhenbao in the novella “Red Rose, White Rose,” who was “the ideal modern Chinese man”:

Never had a son been more filial, more considerate, than Zhenbao was to his mother; never was a brother more thoughtful or helpful to his siblings. At work he was the most hard-working and devoted of colleagues; to his friends, the kindest, truest, and most generous of men. Zhenbao’s life was a complete success. If he had believed in reincarnation — he didn’t — he’d have hoped simply to pick up a new name, then come back and live the same life all over again.

Zhenbao came from a poor family but worked hard to create a better life for himself; Chang describes him as the perfect Western self-made man. But — and this should be no surprise, for if an author describes a character’s life as perfect in the beginning of a story, it simply must get shaken up — Zhenbao cannot be “modern” in the sense of following all his desires. He is unhappy with his wife but feels he cannot pursue the woman he loves; he is torn between romance and loyalty to family and friends. He is in many ways a traditional man wanting to be free of tradition, but unable to make himself so.

The gender dynamics are a little hard to take, which is no surprise, as the book describes a society that is still old-fashioned in many ways; what I’m uncertain about is Chang’s take on the subject. Occasionally, the narrator will step in and say something about “what women are like,” which tends not to be very flattering, and I don’t know if this is Chang talking to us, or if she is speaking for the culture and not for herself. It’s not easy to detect Chang’s presence in this book — what her views are on the stories she tells.

The writing is captivating, although it follows a rhythm that feels unusual to me — many of the stories cover large sweeps of time, decades in a character’s life perhaps, and Chang will offer a scene for a few pages that gives all kinds of detail and moves through time slowly, and then she’ll sum up years in a short sentence or two. The narratives move abruptly. This is not a flaw; it just takes some getting used to.

For more information on this book, check out Scott Esposito’s interview with Chang’s translator Karen S. Kingsbury and Orpheus’s interesting post on Chang and popularity.

9 responses to “Eileen Chang’s Love in a Fallen City”