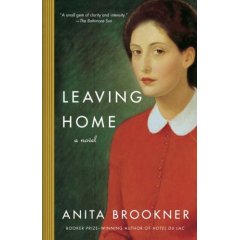 A friend recommended Anita Brookner’s novel Leaving Home; this was a book she’d loved and was intrigued by, partly because of Brookner’s writing style, which breaks the “show don’t tell” rule all over the place. This style is one my friend is drawn to because it’s similar to her own — this is the friend whose novel I’ve been reading and giving feedback on. Both Brookner and my friend write about consciousness, what it’s like to live in one’s mind, and do so in an analytical way — although there’s lots of emotion in the writing too — that involves a lot of explanation and summary. This style appeals to me greatly; while I like plot, what I’m really drawn to (and I know I’ve written about this at length already) is character and idea, and there’s something appealing in a writer breaking a commonly-known rule (show don’t tell) and writing something great while doing so.

Although I enjoyed reading Leaving Home, I have to say that as far as analytical, idea-driven, consciousness-exploring novels go, I’ve been having more fun reading my friend’s book than Brookner’s. I don’t think this is fair to Brookner, though; maybe reading two novels in this style at once is a little much, and at another time I would have been more absorbed in Brookner’s book. I liked it, definitely; I just was willing to set it aside a little too frequently.

The story is about 26-year-old Emma who decides to leave her quiet life with her mother in London and move to Paris to study landscape gardening. She longs for a life that is fuller and more exciting than what she’s known, but she also knows herself quite well and knows that she is most comfortable in the order and solitude she has left behind. She leaves home and then begins to wonder what “home” is and whether she will ever feel at home again. Although she learns to be independent and meets new people in Paris — Michael, with whom she takes very chaste walks, and Francoise, who lives the kind of exciting life she sometimes wishes for — she soon enough finds herself returning to London — and then traveling back and forth between the two cities — as she tries to figure out just what she can have and what she wants out of life.

The fundamental question she faces is whether she should push herself to change the kind of person she has been in order to live a more vibrant life, or whether she should accept the quietness, the isolation, the melancholy, as simply who she is, make peace with it, and go on. The landscape gardening she studies becomes a metaphor for this conflict — the careful control of nature she sees in the gardens mirrors her own self-controlled, orderly life, and as she feels ambivalently about her life, so she feels ambivalently about those gardens, wanting, at times, nothing more than to devote her life to studying them and, at others, rejecting the whole enterprise.

The writing is very calm and matter-of-fact, expressing Emma’s personality by both hiding and revealing the emotional turmoil underlying the surface quiet. The sentences themselves are generally simple and straight-forward, almost emotionless; for example, she says of her mother:

We passed the slow day together, reading. I was beginning to mirror her habits, her reclusion. When we embraced it was wordlessly, as if we understood each other perfectly. Away from her it seemed as if there were no end to leaving home.

But the emotion is there, after all, and maybe more present because it is so seldom acknowledged. In this sense, Brookner does show instead of tell — she leaves the reader to intuit the level of turmoil her narrator experiences. The narrator tells us much about her thoughts and feelings — in long analytical passages of summary — but there are also depths she hides.

I will certainly read more Brookner novels in the future; this is my second one (after Hotel du Lac), and I’ve liked both of them enough to be interested in reading them again, as well as picking up more of her numerous other novels.