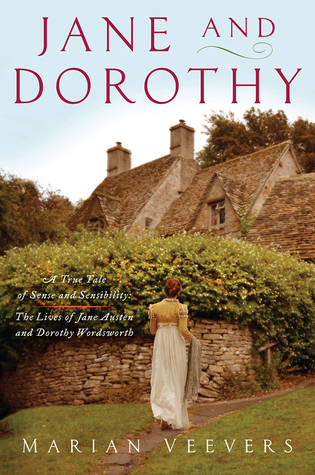 Jane and Dorothy: A True Tale of Sense and Sensibility: The Lives of Jane Austen and Dorothy Wordsworth by Marian Veveers was an interesting and enjoyable read. I think it’s best meant for casual fans of Austen and/or Dorothy Wordsworth (probably the former?) rather than for experts or those who have read in-depth biographies of these figures before. But, then, I’ve read biographies of both these writers and I still enjoyed this book, even though it didn’t have information I hadn’t read elsewhere. It’s relatively short for a biography of two writers — just over 300 pages, so for me, it was a quick review of these writers’ lives, plus some compelling points about how the two lives illuminate each other.

As you can tell from the title, Veveers works with the sense and sensibility opposition, in this case Austen being the one more reliant on sense and Wordsworth the one full of sensibility. Veveers complicates this opposition nicely, showing the moments Austen was driven by sensibility and Wordsworth ruled by sense, and she situates the ideas about logic and emotion briefly but effectively in the context of the beginnings of romanticism.

I particularly liked how Veveers uses these two women’s lives to show what life was like for women of their class in the late eighteenth and early nineteenth centuries: they both came from privileged but precarious backgrounds and both struggled with money and status their whole lives, even though they reacted to the situation differently, Dorothy choosing to live unconventionally with mixed results and Jane dutifully but often unhappily following family members from house to house as was expected of her. Neither woman married, of course, and Veveers explains well what this meant: they were dependent on family members and not considered high priority enough for anyone to send much money or educational opportunity their way. Both women struggled to find time and solitude enough to devote to their writing.

After reading this and Sharp by Michelle Dean, I’ve decided I like group biographies and also biographies that aren’t particularly thorough, as these two aren’t. I don’t need to know — and will certainly forget — all the details that go into more comprehensive works.